A few weeks ago I was running errands on a Saturday, with an almost final stop at Home Depot to pick up some stuff for the garden. I had my daughters with me and they were ready for a break so  we stopped at McDonalds for the dollar sundae for them and iced tea for me. There were only a couple people in line, so we’re waiting, and then as the line moves forward I hear the volume go up some. The guy at the front of the line was asking for replacement food, it seems they had put ketchup on his burger and he didn’t like ketchup.

Easy stuff, right? Give the guy a new burger and move on. Instead, she told him no new food without a receipt from the original purchase…which he didn’t seem to have. She was quietly strong about it, avoided turning it into a confrontation with good use of body positioning, and after a minute the hamburglar gave up. I can only assume this is a common scam in this store and the staff was just tired of it.

We were next and for some reason I was expecting a gruff, brusque reception, in part being post confrontation and in part just thinking she was…tough. Instead she was all smiles again, cheerfully piling on the M&M’s and whipped cream at the kids request,turning a $1 sundae into a $1.50 one,and a good afternoon into a great one. Few things better than treating the family to some ice cream on a Saturday afternoon. 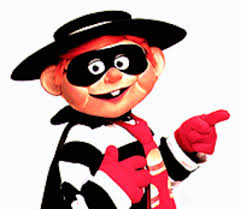 One thought on “A Strange Day at McDonalds”