One of the items I’ve had on my todo list for a while is to write up notes on the state of the admin tools for SQLSaturday as they pertain to marketing. For those who haven’t managed an event, SQLSaturday is really three different sites; the public facing one that most of you see, an event administrative site for event teams, and a higher level admin site for PASS HQ to use in provisioning events. Of those three the public site by far has had the most visible work. The event admin site has definitely had a few changes, but nothing big. I wrote most of it back in the day, Steve Jones and I trying to stub out tools we thought we needed and then seeing which ones really were needed, so in many ways the tools are about the say as they were when we handed the keys to PASS back in March 2010. Not glamorous, bare bones even, it was interesting to return to being a consumer of them for SQLSaturday Orlando and see the places where we just didn’t have a deep enough vision back then.

At a high level marketing for SQLSaturday is about what we say to visitors on the landing page, email messages to the mailing list, event flyers, and what we broadcast on Twitter. Let’s start with the front page. Here’s the editor:

The editor isn’t bad. It tends to reformat based on some rules it has internally, but in practice I build the HTML offline and do some testing on it, then paste it here and do some final testing by sending to the ‘Test Group’. That’s definitely a tip worth remembering, don’t invest time in a web session that could time out when you take a call!

Related to that on the home page the twitter feed takes up a lot of space and that leaves precious little space ‘above the fold’. Maybe we can move it, or stack it, or change the layout so it more horizontal down further on the page. In practice we don’t see much traffic there but we had to generate traffic to make it feel alive. Maybe an option to turn on/off would be useful too

There is also a menu for uploading files and we used that quite a bit. Sponsor logos, PDF’s, and even some calendar files, nice to have them in place where they don’t disappear. Not fancy, but very useful. The only time it was a challenge was when we had a file type the upload didn’t support..

The default template is blah and it’s one place where PASS could help in two ways. One is by having some design a nicer email template as the default, the other is by allowing the event team to upload their own template. For those that use the ‘auto messaging’ which is a default set of messages they would get a nicer look, and for those who custom write their messages they could save the time designing a template. The template needs to be responsive, something that looks good in Gmail, Outlook, and on phones. I ended up using tables for the formatting and that worked ok, if not cutting edge. Definitely mark up your template so it’s easy to see where to put the various elements (sponsors, seminars, etc). Not everyone will fit into a default template, but a choice of two or three might well cover most. We used one where the right column carried out calendar of events, links to flyers, etc, that we wanted to repeat, and on the bottom we had the sponsors at Gold/Silver level.

Another area that needs upgrades is the tokens that you can embed in the message.  It would be nice to have one for unsubscribe and one for attendance status (Attending, Not Registered Yet, ?).  One for Guidebook also.

Autotext is a great idea, have it construct the schedule or list of sessions on the fly, but the formatting is plain, and you can’t control it at design time. We didn’t use it, and just the one email with the nice looking schedule as easily an hour to build.

There is a good handful of supported mailing lists, but the titles aren’t always clear on the impact. I’d like to see a link to the Wiki for details, and I think it would help a lot if the estimated send count was shown, either in the list box or near by. 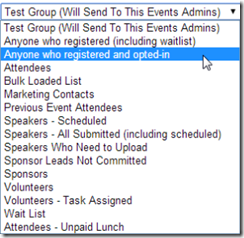 By far the biggest gap is we don’t get stats on the email beyond the number sent. Bounces go off to some place, and we don’t get open rates, or at least click throughs. The links in the email don’t get coded so it’s hard to tell which ones work and which ones don’t (and that applies to the event site too).

A note here too about the “bulk loaded list”. We were able to get HQ to load all the distinct emails from previous events here in Orlando and they get added to the registration table as bulk loaded. That worked pretty good, far better than trying to send to them from outside the framework. We found a few bugs along the way, but it helped us reach people that missed the event last year. Well worth doing, but requires HQ to do it.

The only issue from bulk loaded that mattered was the unsubscribe. We had about 10 people complain that unsubscribe required them to login first. Totally valid complaint, and I think something that got missed when logins to the site were enabled. High on the list of things that need to be fixed.

We charge $10 for lunch. Some pay at registration, many wait, which is ok. When we send to the unpaid lunch list we got quite a few that were bringing their own (20 or 30). It would be nice to have that as a registration option to save coming back to it later.

There is also no support for trying to track things like “bring a friend”. Something along the lines of affiliate links would be very useful, and that might not be enough (but a start). Capturing the source at registration would help a lot in assessing where to put effort (such as our attempts at LinkedIn ads).

Another problem was that when people cancel, it’s a manual process (as in they remind you) to refund lunch money (based on your policy for doing so) and you can’t see the impact. In the final couple days prior to the event we watched our count do plus one minus one all day long as we had cancellations offsetting last minute registrations. I typically count on 30% no show, but is that 30% of total reg, or 30% of those that say they are attending? When you’re sweating space and/or food you really want to see those numbers.

We also had to market seminars and we used EventBrite for the registration. The reg part works fine, but we pay more fees (EventBrite + PayPal) and because it was external, there was no mailing list for “registered for seminar”. Really it’s bigger than that. Managing it separately isn’t the worst thing, seminars really need their own “manager”. The question – on which I’m not clear on the answer – is
whether it’s worth the time to do the integration. That’s worth a big discussion.

I’m convinced a good flyer is an important marketing asset. Not just for printing, but for people to forward to colleagues. Designing a good one is hard. I suspect we’d be happy with a stock flyer if it was well done, and that is one area where HQ does great work on the Summit, we should leverage that for SQLSaturday (same thing for the email templates I mentioned earlier).

There is only minimal support for Twitter, auto tweeting when the user opts in. We went way beyond that this year, generating sponsor love messages, lots of messages about speakers and topics, and the speakers/sponsors really liked them. We also tried to follow anyone who registered and provided a Twitter handle. I used HootSuite paid edition for the scheduling, and I hacked the messages using the XML feed on the site to get various combinations. It would be really nice to load a template “Thanks to ….. for sponsoring SQLSaturday Orlando” and have the system generate the tweets and sending them at the right time, or scheduling them via the API.

Another miss from the early days, there is no built-in plan/display for sharing photos related to the event. Flicker, whatever, we need a pattern, and we may need tools to help with it, including a slide show viewer for the site.

I saved the biggest need and biggest win for last. You saw this in a bunch of marketing posts, this is what helps you figure out if you’re on track or not, if something is working or not. This needs to be built in and emailed daily (if enabled). Kendal Van Dyke did with with Excel and Powershell, but it should be native, along with the ability to see other lines (lunch reg, cancellation) and it would be nice to have it overlaid with how similar events have done (does our curve skew from the national trend? from the Tampa trend?)

There are lots of wishes here, but let me boil it down to the few things that I think PASS can do quickly and easily to help the marketing person on the event team:

Plenty of room for investment, and I think investments in marketing are worth doing. Later this week I’ll try to recap my marketing plan that we will use next year.