Part 1 will be about things we did (or didn’t) do and some lessons learned. In Part 2 I will share some thoughts on the SQLSaturday tools/web site. Part 3 isn’t really about SQLSaturday, rather our student seminar that we run concurrently. I’ll get to Part 2 and 3 as soon as I can.

We tried to run leaner this year, in a bunch of ways:

We moved the speaker dinner to a different location (Buffalo Wild Wings). Parking was better and it’s covered so no worry about rain. The downside was that we didn’t have a buffet line set up for the appetizers, instead we ordered appetizers and wings and had it shared family style. It worked, but not great. The area was perfect for conversation. Cost was ok.

We ordered steel water bottles as our speaker gift, plus some extras for the end of day give away. We used “#SQLSatOrlando” for the imprint and it was ok, but not as big as we would have liked. Speakers seems to like them anyway.  About $8 each.

We forgot to remind speakers that the projectors are VGA only.

Guest wifi is 100% unreliable for presentations. Not a big deal, but we need to make sure speakers know ahead of time.

We did our usual polos for speakers who requested them. Cost was $20 each. Because we were more cost conscious this year they were embroidered with #SQLSatOrlando (and maybe a little bit because I don’t like the new logo). I think Hawaiian shirts next year.

Thinking about those last two items, we didn’t do a great job of managing the process of handing them out. Next year I’m thinking brown paper bags labeled with their name so we figure out who hasn’t picked up their stuff yet. We also didn’t print their SpeedPASS to go with it, though we did print them on request the next year. Less than ideal.

We ordered more donuts this year, 25 dozen, and they were all eaten (20 dozen last year). We ordered 7.5 gallons of coffee (about $110) and supplemented with coffee made on site and still hit a point where people wanted coffee and we were out. We’re thinking to buy another 5 gallon container for next year, the ones we have worked out great. I think I’d rather do away with the overhead of making coffee (coffee maker, water, power, coffee, staffing, clean up, etc). If we have an extra container we start the day well stocked and we can send out out for refill if we need to.

In previous years we had the SpeedPASS printing station separate from check-in, this year we put them side by side. It felt like better flow and less frustration if someone was in the wrong line. We didn’t have the lines labeled. We also had students lining up, even though they were supposed to be at a different building. We use a fast laser printer which worked well, we downloaded all (or almost all) of the PDF’s ahead of time and that worked ok. It’s still a pain. If we could get SpeedPASS on one page I think we’d just print them all Friday night. Out of all the stuff we do, I feel like this part needs the most attention before next year.

Lunch was boxed lunches from Firehouse. Roast beef turned out to be far more popular than expected. Only one complaint about the lunch. I think for next year we will look to see if we can do a little more premium lunch if we do boxes again – maybe a second side, better bread, I don’t know. It was fine, just wasn’t (to me) in the same league as the hot lunch. With boxed lunches we didn’t have to budget/buy paper plates and flatware, or to-go boxes for those heading to lunch sessions.

Speaking of lunch, at one point we had 150 people registered that said they were going to buy lunch but had not paid. We sent a few reminders and that went down some, but never came close to zero. This year we set a Thursday night cutoff for ordering/cancelling, but did that late – next year we need to announce all of that sooner and send more reminders. The worry for us is not having lunch for someone who expected it, vs ordering extra food and then not having someone pay for it. We ended up with about 50 extra meals, but hard to tell if that was no shows or what we ordered extra, probably a combination. We need to work this harder next year.

We did ok on managing our budget and buying enough but not too much in the way of supplies (other than lunch itself). We didn’t hit our target amount for sponsorship but we adjusted our spend accordingly and that went well.

We did ok on sponsorship. GAP sponsors certainly help. We were thrilled to have a new staffing company join us this year, and one from a few years back return. We simplified our sponsorship plan and that seemed to work. We emailed logistics separately, but didn’t include details on the scan/get the report process. Fix that next year.

We did not do well on organizing volunteers outside the core team. I turned on the volunteer section late and we just ran out of time to promote it. The volunteer section seems almost great, needs more attention next year to see if we can make it work for us.

We had our first ever networking event from 3:30 to 4pm. It was an experiment. We had a great sponsor (SNI Technology) provide cupcakes, we put on some music, and we just let everyone relax for 30 minutes outside on the covered walkway. We didn’t push any “meet x people” or anything else, it was just let people relax and see what happened. It seemed to go well, and now we can think about how to do a little more next year. I think as much as the cupcakes were good, ice cream might be better – less messy, easier to eat slowly? Success was seeing a crowd there and not all leaving early! It also served as a useful way to queue the attendees for the end of day session.

From 4 to 5 pm we did our first even all-in-one-place end of day session. We used the auditorium, a very nice space. We found out two days earlier that there would be no cable on the stage to the projector, so we had plan A (USB stick in the machine next to the projector) and Plan B (Miracast via HDMI). That mostly worked. As far as the actual session, we spent at least a couple hours deciding what to do. Should it be a “big name” speaker? Or what topic would be of interest to the widest range of attendees? We thought about a live podcast, or a panel, or both. Finally we decided to do a game show – SQLFamily Feud! We made that a tentative decision until we could confirm the logistics, once Brad & Josh had the software identified we committed to doing it. We had two teams of four speakers, plus two team captains from the audience. I wasn’t sure how it would be received, but as soon as the attendees heard the music from the show they were engaged.  I think we did 8 rounds, it took around 40 minutes. My favorite question was “Name something DBA’s hate” and when someone answered “Developers” the audience just erupted! Out of all the questions, one generated a guess of proctologist. Wrong, but still funny. As soon as the feud ended we moved into the end of day raffle. That went smoothly and we were done at maybe 5:15 instead of 6:00 pm, felt like we were done hours early.

We then had to finish cleanup – we should have done more during or before the networking break. We also should have had someone scanning the attendee check-in tickets, I ended up doing that one night the following week, not the most fun task.

I heard a lot of positive comments this year from both speakers and attendees. I haven’t read the event evals yet, need to get to that soon.

We finished up with an after party at Fourth Street Grill. Good food, good service, but parking was hard to find. Food was good enough I hate to change next year. We’ll see.

We ended up with lower than expected attendance, about 300. Part of that looks like it was due to us slowing down on messaging the week of and the week after the hurricane, but it also looks like maybe we didn’t push as hard in the last 2 weeks as we should have. You can look at the year over year registration by week below and see that total registration was quite a bit lower, leading to lower attendance.  One big data point we don’t have integrated here is when the marketing messages went out, maybe something we can add for next year.

All in all a pretty good event for us. Kudos to Dave Mason for taking over marketing this year. Brad & Josh just nailed the Feud, couldn’t have asked for better implementation or the audience reception. Shawn was the MVP this year, he handled lunch, printing, and a bunch of other stuff so that I could spend time on the student seminar. Kendal moderated the seminar for the students and we had lots of positive feedback on that entire effort. Gareth and Gilda rounded out the team, helping out on game day, and Pam Shaw helped out during the networking event to stage the cupcakes!

One thing I struggled with was how to capture all the things worth sharing or thinking about or fixing. How to do that better? Sometimes it’s hard enough to agree on the work and do the work. Just thinking about what I missed, here’s one – Firehouse can only do a max charge of $1000 per transaction. Shawn had to sign two receipts for $900 each! Not a big deal, just one of the things is nice to know.

As I write this I’m still not done though. Still need to finish two more posts worth of notes, write thank yous to sponsors and speakers, follow up notes to students, catching up on LinkedIn requests, sending out a final budget summary and probably a few more things.

With rough but maybe useful notes complete, I want to finish with a couple thoughts on my philosophy. It’s up to you how you run your event, I think that’s the heart of SQLSaturday. Don’t be afraid to try new things and don’t be afraid to do less. Be thoughtful about choices, but recognize that it all adds up. I remember back in year one we had hot water and tea bags, boxes of bananas, and a lot of other stuff. Good stuff, but it takes effort, and we do fine without it. The key is to set expectations if you’re making a change. 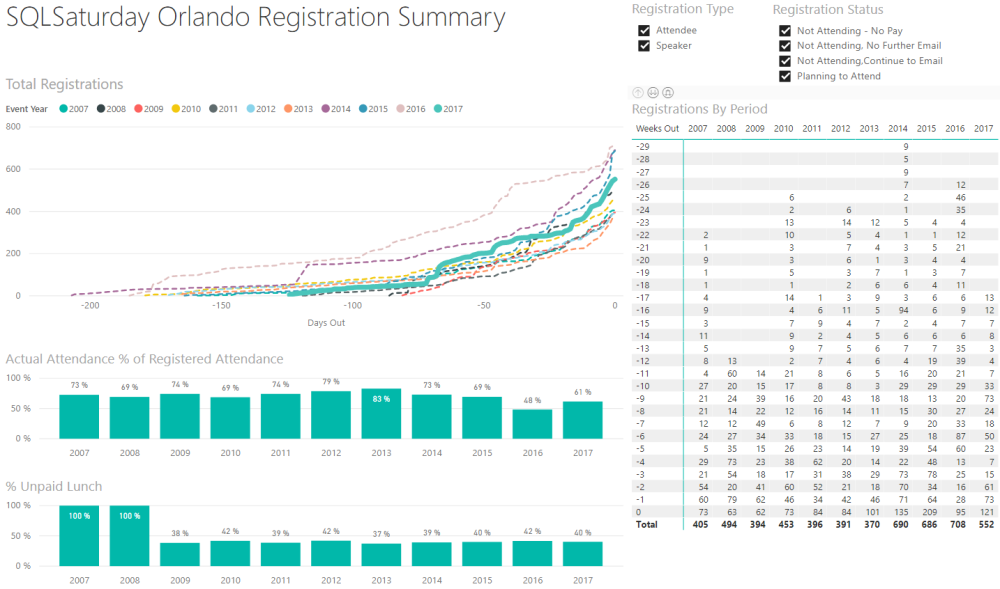