Notes from a speaker/volunteer perspective:

We manage the event as a committee here in Orlando, with leadership alternating between oPASS and MagicPASS. I think this year was our best year so far and a really good team. Everyone had a pretty good idea of what they wanted to get done and stayed focused, and Kendal did a nice job of figuring out which ideas to take and which to leave on the list. Our weekly Tuesday calls really helped maintain communication. We also focused on numbers a lot; registration, speakers, sponsors, seminar registrations too. It was also nice to reinvigorate our relationship with ONETUG (.Net group here in Orlando) and we look forward to doing a lot to help with with the Code Camp in early 2015. We’re all writing up notes on what we could do better/different next year and in the next week or so we’ll have our first planning call for SQLSaturday Orlando 2015, then we’ll mostly be on break until March.

We had a lot of great volunteers, but I had a note to mention one – Rodney Landrum. Rodney is quiet and behind the scenes, but he gets things done. By the time I arrived Saturday morning he was covered in sweat from moving tables and handling problems, then came the student seminar at 9 am to teach students about what relational databases are, and then he went back over at 1130 to host the raffle for them, and that’s just the parts I saw. All of which took up so much time he didn’t get to do the thing he wanted to do – be the roving reporter. We’ll get that next year Rodney! I didn’t get to spend hardly any time with volunteers and I missed that, I like hearing the stories and having time to say thank you to them, something for me to do better at next year.

This year was the most I’ve been involved since I handed over the keys to Orlando years ago. It was good to be back. Interesting to see lessons learned, and some lost and re-learned (coffee plan). The local franchise feels strong. We’re lucky to have a lot of people in Orlando with talent and energy. It was good to have the time and energy to put into trying to push the edges back some, and sometimes a challenge to remember that while ideas area good, they can be stressful when the team sees something else that might get added to the stack.

I meant to take more photos, only ended up with a couple. Here is Jedi Knight Mark Souza defending the attendees against the Empire, which was attacking with a t-shirt slingshot. He put up a valiant fight but was finally knocked to the ground by Sith Lord Rodney Landrum. Obi-Wan was bent and a little crumpled, but was able to attend the closing raffle by leaning against the wall, light sql saber still at the ready! 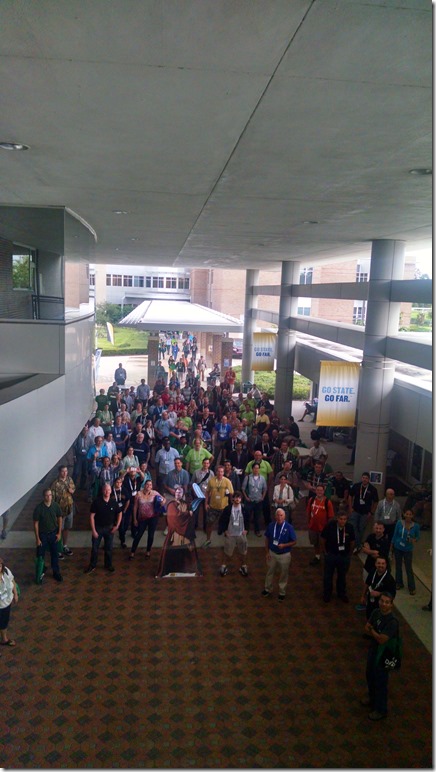 This is mid-raffle. It’s a lot of people! Green shirts are volunteers. The walkway behind the crowd is where we put the serving tables at lunch (and check-in before that), with the building that has our classrooms on the far side. 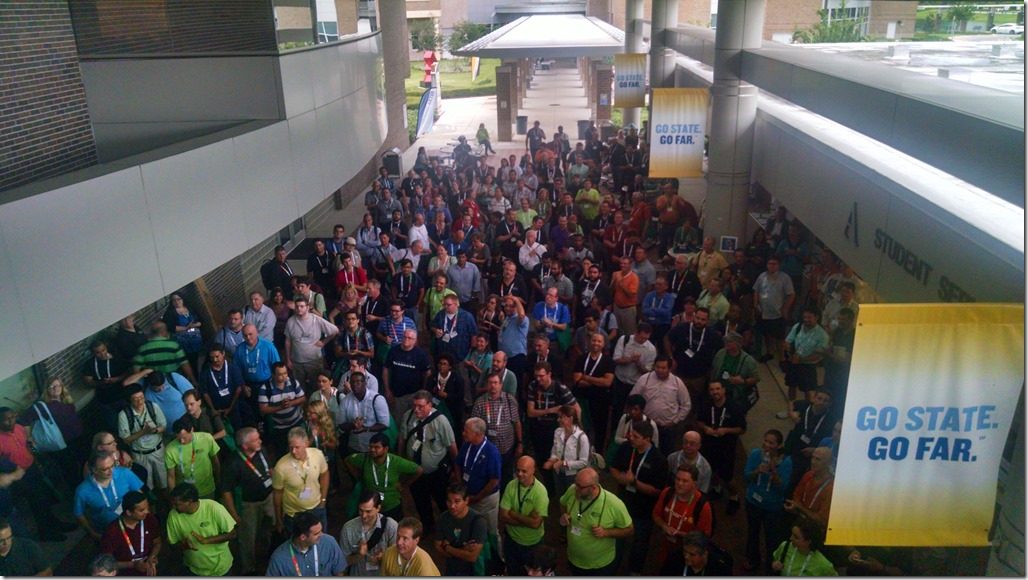 That’s for it this year, now we have to finish up our joint meeting of OPASS/MagicPASS in October featuring Mark Souza, then it’s off to the Summit and then I think it will be time for the end of year break. Time flies.

2 thoughts on “Notes On SQLSaturday Orlando #318”